I love indie comics. As a struggling, newbie writer, I understand the difficulty that comes from putting pieces of your life aside and sitting down to craft something, usually for little or no compensation (other than the sweet, sweet joy of seeing people fall in love with your work).

That being said, another aspect of indie comics that is amazing is the fact that there are fewer restrictions on what can be created/marketed and what can’t, especially in regard to genre and story. In fact, many of my favorite comics are those that take the spandex tropes and turn them on their heads (Think Superman with an addiction to amphetamines and hardcore parental issues), and these comics wouldn’t stand much of a chance under the umbrellas of the Big Two. When the over the top aspects of comics stories are forced into a reality-colored box, things change, and its all thanks to stories and comics that force the change on the industry.

Prairie City Response is a comic that brings one of these extremely interesting stories to bear.

Prairie City Response comes from the mind of Marshall Edwards, with assists from a talented team of artists and graphics people. With the exception of Teigan Hockman (known more fondly as telephonoscope), I haven’t heard of any of these artists before. However, the fact that they are unknowns to me isn’t a barrier to my enjoyment of their work.

The first page of PCR #1 sets the tone well, introducing us to two of the series’ protagonists: Zeno, a slightly dashing psychic whose entire bearing (and showoff tendencies) throws hints that he’s carrying a more than his share of baggage, and Cannonball, an alien with a violent streak. Later we are introduced to Dryad, a mysterious masked woman who has top notch combat skills, plant-based powers, and a completely hidden professional/criminal record. Along the way we are introduced to several supporting characters, and given snippets of background information on the stars. 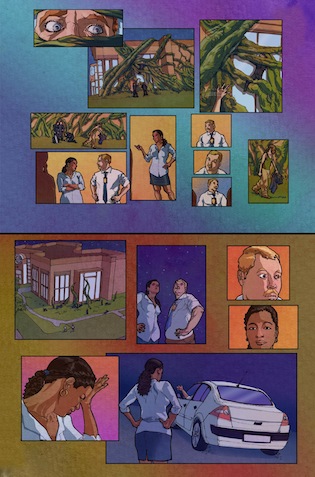 Each person that we meet is somehow connected to The Union, an organization that creates teams to handle “Super-Crime” in the wake of several high profile tragedies stemming from a private security group called Sweetwater. We are treated to the first meetings and first impressions of the three main characters, and learn that they are the new three-person response team for Prairie City, and designated to handle any and all Super-Crime that occurs in the area. Oh, and Prairie City’s top flight superhero, one Red Mask, was killed in action while defending Prairie City from an as-yet unknown assailant.

After establishing the characters, the story of PCR does a great job of revealing just enough to draw you into the book without revealing too much.  You aren’t bullied into wondering what’s going on with the aliens in Prairie City. After a few reaction scenes and a particularly foreboding piece of exposition between Cannonball and an old colleague, the question lightly pops up: What the heck is going on here?

Edwards’ dialogue is very crisp and does a good job of revealing insight into character quirks. Zeno may or may not be a hack; Cannonball is trying really hard to be nice (accepted), and Dryad…well, she’s mysterious. And sleepy. It also carries along the plot well: routine meetings and character interactions have the right amount of reality and intensity without coming off as hackneyed or stale.

Plotting is very well done. Edwards shirks the oft-used introductory/expository rap sheet in exchange for actually letting the story tell us about the characters. The story itself moves along at a respectable, but forgiving, clip. Readers can easily follow through different shifts in time and setting. The only major issue in the book lies in this area, though: it feels like there’s too much story in #1. It’s an understandable move, because PCR is a bit ambitious, but there was a final introductory point that I felt could have been left for the second issue.

VIsually, PCR is a treat. I found the cover to be one of the most effective I’ve seen: simple and focused. Colors are vibrant and pleasing to the eye. Marquez’ art seems to just fit. Facial expressions have real emotion, which I can appreciate. There are a couple of points where the use of a different perspective would have communicated the urgency of a scene better, or lent more action, but overall the art was truly pleasing. It all meshes in one scene, where you can see the destruction wrought on Prairie City during our introduction to the death of Red Mask. The color scheme works, the scale is incredible, and the perspective lends total gravity to the scene. The lettering was also very well done, and not distracting.

Prairie City Response reminds me of other “Reality Hero” (Yes, I made up that term) comics, like Nowhere Men, The Boys, or Powers, where the whole concept of Superheroics is taken and given an injection of grit and awesome. Like those comics, PCR does a great job of establishing something amazing right out of the gate. With great story and stellar art, Prairie City Response is one to watch out for.