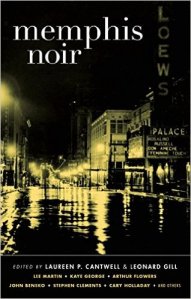 Earlier in the week, I attended a release party for Memphis Noir, the latest volume in Akashic Books’ city themed Noir series. This anthology features a piece of mine, titled “Tell Him What You Want,” which appears alongside works from folks like Jamey Hatley and Sheree Renee Thomas–folks who are legitimate celebrities (and fantastic writers)! At the party, I laughed, signed people’s books, and mangled a quote from Kiese Laymon while discussing the contents of and inspiration for my piece.

The anthology has been pretty well received and my piece has been getting some nice mentions. One of these mentions, which is part of a review written by The Book Faerie, has a pretty interesting take. I’ll quote it below.

“Tell Him What You Want” is the story of a woman who wanted to be left alone and did what she had to.  Somehow loving someone in Memphis might mean your death.

I often hear writers refer to this–where they hear from readers who take something from a story that is different by many degrees from what the author intended to communicate. This is never mentioned as a bad thing (unless it’s part of a bad review), and to be clear, I find The Book Faerie’s reading of my story very, very interesting. And it makes me happy.

When asked to describe what led to me writing “Tell Him What You Want”, I talked about my community, and painted a picture for the audience of the world that I grew up in. This world was populated by po’ black folks who were just trying to make it in whatever way they could. For me, that was what I wanted to show the most in my story: the people, the emotions, the lies and lust and love that made up a community that was pretty maligned and forgotten by so many people in Memphis (at least, until it was time to build high-end townhomes there). In my view, my story wasn’t very noir-ish, even though it was basically a love letter to Walter Mosley. Of course, this being a piece of fiction intended to be noir, murder was central to the plot, and my language choice was pretty dark. Still, my piece, in my conception, was a bird’s eye moment, meant to be taken as a single occurrence in a larger stream.

The Book Faerie’s personalization of “Tell Him What You Want,” and her attendant takeaways, are proof that everyone views your work in their own, unique way, and that these uniquely personal readings allow people to get what they need from your work. This is why I write.

You can get Memphis Noir from Akashic Books by clicking here. It is available in print and ebook.

4 thoughts on “An Interesting Occurrence of Personalization”