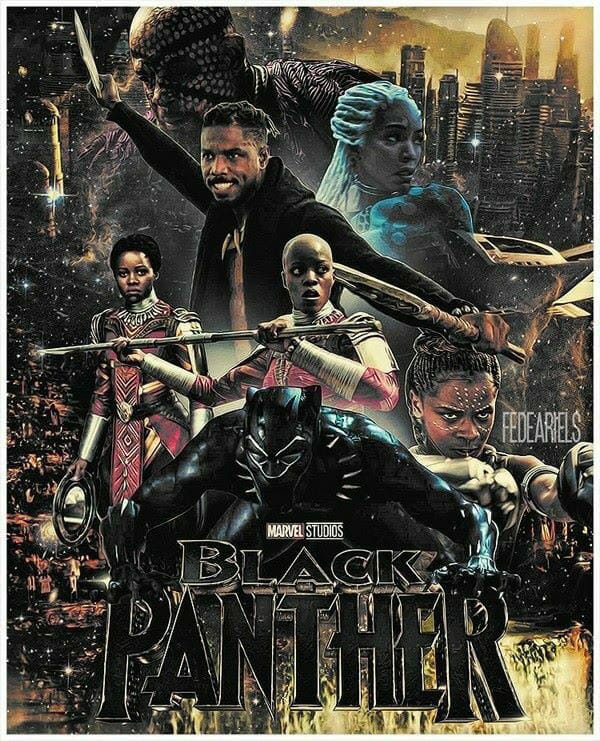 What’s up y’all. Been a minute.

So, Marvel decided not to go with that script that Tyler Perry sent them for the Black Panther film, instead hiring Ryan Coogler to put together a movie that looks like it’s going to be a late winter/early spring hit–at least, if Twitter has anything to say about it.

Here’s the trailer, for any of you that have been living under a rock.

Of course, with a release like this, it’s inevitable that the white fanboys are going wild with those same old moist mayonnaise clapbacks that they fling around every time there’s a group of people enjoying something that they can’t be a part of. But this is old news in comics and comics media–literally, every time something dares to be marketed to anyone but white men, white men freak out. Nobody cares anymore, Jake from State Farm. Take your “if he was called White Panther, SJWs and snowflakes would be TRIGGERED” shitposts somewhere else.

No, once again, Marvel has (halfway) dared to create something that very directly speaks to black sensibilities and black aesthetics. But not all black fans are yelling Make Mine Marvel this time. Even though most black fans (including myself) are hella excited about the Black Panther trailer and will definitely be rocking Wakanda-esque cosplay to whichever theater hasn’t placed police snipers on their roof, there are some black fans who are watching our excitement with a bit of detachment. I can’t say that I blame them.

The history of T’challa, Black Panther and King of Wakanda, is a complicated one. Panther’s first appearance was in the pages of Marvel’s Fantastic Four #52 in 1966, and he got a chance to headline a book–Marvel’s long-running Jungle Action series–in 1973 with issue #5.  The character himself was created by Marvel comics wonder-team Stan Lee and Jack Kirby–two Jewish men of Romanian and Austrian descent, respectively–and is the first appearance of a black superhero in mainstream comics. For a brief time in 1966, Panther’s name was changed to Black Leopard, so as not to confuse him with the black liberation group the Black Panther Party.

Panther’s early stories, particularly the 13 issue miniseries “Panther’s Rage” written by Don McGregor and penciled by Gil Kane, are considered masterworks today and are likely a huge influence on the film. Erik Killmonger, for example, is a character that was introduced during the “Panther’s Rage” arc who was heavily featured in the trailer and will be portrayed in the film by Michael B. Jordan (yet another Human Torch actor gone on to greater things.). But these stories, at their core, have always been westernized, and largely romanticized takes on a fictional idea of Africa. This can be a problem even when creators from the African Diaspora do it:

I’m consciously aware that I am indulging in the long-held diaspora tradition of “re-imagining” Africa. And I do so for my own distinct purposes, tied into those conflicting feelings of belonging and alienation that typify the Du Boisian double-consciousness. My perceptions of this vast, diverse continent and its equally complex history, is inherently that of the outsider, or worse still, the dreaded tourist. I see things with the western gaze, translate them through a western lens and even learn through western methods. At what point was my cultural borrowing a form of “appropriation?” When does culturally distinct cross the line into exoticism? With whose voice are my African-based characters speaking? How does a writer several generations removed from Africa build “authenticity”–and does such a thing even exist? Are these attempts to subvert the dominant Eurocentric narrative in fantasy postcolonial? Or is it merely Western-derived fantasy with an African face?

From P. Djeli Clark’s “Spears, Sorcery, and Double-Consciousness” series, a must read for black fans and black SFF writers alike.

The fact of this matter is, Wakanda is a fictional African country created by two men with no real connection to the continent, no take on its histories, and completely separate from any of its realities. Wakanda and its characters have been handled almost entirely by Western writers, depicted almost entirely by Western artists. Any idea of who’s missing from this equation?

Yep, African creators and fans themselves, who have some pretty valid critiques of Black Panther as a concept, a character, and a work of art:

What makes Wakanda so unique is that it’s one of the earliest offerings of Afrofuturism – a tall order especially for a post-colonial world which has no idea what that would look like.[…]The core issue with Wakanda’s portrayal is the ignorant Western philosophy that Africa is one cultural blob so one can essentially cherry-pick various elements from random African cultures and mix them together in an artistic gumbo because “it looks cool”.[…] Instead of organically designing a unique, solid culture pertaining to the region, creators would just mix random elements from cultures across the continent and say “Well, Wakanda influenced them all”. While the attempts are well-intentioned, they rarely stick the landing because no one’s doing the world-building necessary for such a unique civilization.”

From Paul Louise Julie’s guest post “Why I Wasn’t Excited for Black Panther’s MCU Debut: Guest Contribution by Paul Louise-Julie” over at Say Word to the Nerd.

Black Panther, Wakanda, and all of the characters in the property aren’t immune to this critique. The entire concept suffers at the hand of the Western gaze and doesn’t quite live up to its full potential. As Nigerian-American YouTube comedian Evelyn From the Internets reflects on her childhood growing up around black Americans and being teased for her African-ness, she is prompted to ask all of us: “So NOW It’s Cool To Be From Wakanda?”

And there are critiques from Black Americans as well as black people from around the Diaspora. When will we see big-budget superhero and speculative film mythologies and stories that center Afro-Latinx or Afro-Caribbean superheroes? There has to be more than Luke Cage for us, and DC’s only consolation prize for black fans looking for a bit of representation was an admittedly…aight collection of Vixen short cartoons.

The Black Panther trailer looks amazing (The CAST! Look at all these black women!!), and lots of us are excited, but we can’t forget that this isn’t the end of the fight. Now, that’s not to say that Black Panther is small potatoes–we should take the time to savor this victory for sure, but we also have to remember that there is still much work to do to make sure that all of our stories and perspectives are getting the respect they deserve. Part of this work is putting our egos aside and having these critical conversations about the stories that we consume, the flawed people that create them, and the oppressive systems that make them possible. We’ve gotta respect these perspectives if we’re really going to make this stuff welcoming for everyone.

Well, we gotta respect all perspectives except the one of that guy talking about the spears. He’s a dumbass. Ignore him.